Long Winding Road Trip Away From The Asylum Part Nine 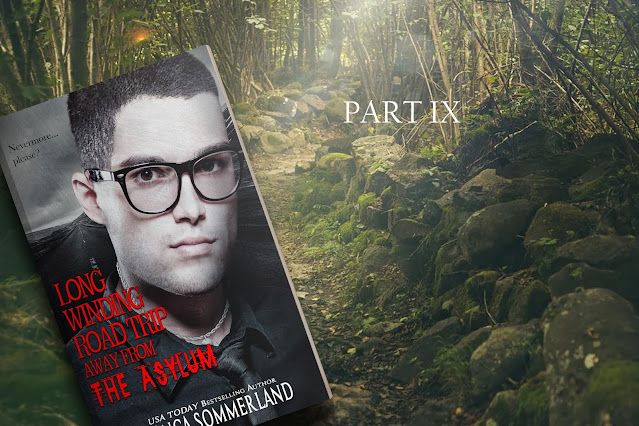 Hope you've had an awesome weekend!

The openness, the peace in the special silence only found in the wilderness, the freshness of the air, were all so new Wren couldn’t quite take it all in without his Dom’s arms around him. Almost overwhelming, like he could get lost in it.

He didn’t even care when his buttons popped as Noah stripped him down. That the earth was rough under the shirt Noah lay over it to set him on. Hands curved around Noah’s shoulders, he looked into those deep gray eyes, recalling the cell they’d shared.

And a freedom he’d never really wanted for himself.

But needed for this man.

The trees and the sky and the mountains weren’t familiar to him until he saw them around Noah, his powerful body seeming like it belonged here. Definitely a reason to appreciate the view up close now.

“I like that smile.” Noah brushed a kiss over Wren’s lips, freeing his dick, then preparing them both before he slid into Wren at the same slow pace he’d taken his mouth. “I’m guessing it’s not so terrible out here as you thought?”

Tipping his head back, absorbing the deep fullness, the slight burn of being stretched, being possessed all over again, Wren shook his head. “No, it’s not terrible now, sir. It feels good with you.”

“Mmm, I bet.” Noah gripped Wren’s hips, drawing out, then slamming in with another kiss to Wren’s lips to steal away his breath, then give it back. “Fuck, I’ve missed this body. We don’t often get time like this back home. I need to make more of it.”

Arching into each thrust, Wren tried to imagine such a thing being possible. He didn’t always understand the push and pull between the core, but he knew enough to avoid most of it. And he knew his Dom. Noah never did anything halfway. If he gave his attention to someone, it was in full. Of everyone who gained that intense focus, Jamie was at the top of the list, followed closely by Jared. They needed Noah on that level and Wren loved that they had him. That he had them.

What would happen if the role Noah played in everyone’s lives was ever reversed, though? Sometimes, things at The Asylum seemed so fragile. Noah had his moments where he’d snap, but it was never long before he pulled himself back together. His place was secure because so many trusted his leadership. It was a lot though. Those kinds of expectations couldn’t be easy for any man to bear.

Wren wouldn’t demand more from him.

But this...having this with him, all these moments, these days, was a gift he should have seen for what it was from the start.

Lacing his fingers through Noah’s hair, Wren held close to his Dom, breathing with him, every nerve flaring with the brush of skin, the slickness of sweat as Noah urged him to move to his rhythm. His pulse quickened as Noah took him harder, the slap of skin on skin an echo that filtered through the trees.

“Don’t hold back, my little bird.” Noah’s mouth covered his, his forearm under Wren’s waist lifting him up to take him even deeper, pulling Wren to him harder. “I want to see you let go for me.”

Pressure and pleasure spilled over, every muscle tensing, clenching down as heat gathered at the base of Wren’s spine, bursting out with his gasp, his whole body trembling like there’d been a shift in his core and the aftershocks were riding over him. He pressed his thighs to Noah’s hips as his Dom claimed his own release.

Gathering Wren against him, Noah rose up until Wren was straddling his thighs, both their knees bent. He smiled against Wren’s lips. “Much too quiet. Next time, you’ll do better, won’t you, my boy.”

Wren bit back a laugh, nodding and burying his face against Noah’s shoulder. “I may need more practice, sir, but I promise I’ll get it right.”

“Good boy.” Noah braced one hand behind him, stretching back to look up at the darkening sky. “We need to do this more often. All of us. I love The Asylum, but I think sometimes everyone gets too wrapped up in the drama. In...some kind of ownership of one another, rather than the connections we share.”

Trying to picture it, Wren glanced up at Noah. “You will be very tired if you try to do this with everyone, but I’m sure you could manage. I believe in you, sir.”

Noah spat out a laugh, shaking his head and lifting Wren to his feet. He adjusted his jeans, then began dressing Wren. “I don’t mean like that. Just imagine some time to reset. To put away all the stress and struggles and just...be. You haven’t been on your laptop at all and hardly touch your phone. Don’t you feel more rested?”

That was a very good question. Wren cocked his head, absently brushing some dirt off his jeans. “I’m not sure. I do...like not feeling like I have to worry about everyone while doing my job and trying to prepare for the unexpected things that might happen in the bar with the members there. I miss home, but...things are quieter in my head. I don’t feel...wrong, taking your focus. But...is that wrong?”

“Of course not, my boy. You get to have this, too.” Noah stood, dusting off his own jeans. “I’ll find a way to make sure you never doubt that again. Until then, I want you to listen to me. I love you. You have a place in my heart and it’s yours. It’ll never be any less. If you can’t come to me and tell me you need me, I’ll come to you because I hope it will always be true. That you need me. Because I need you.”

Wren pressed his teeth into his bottom lip, releasing it seconds later at Noah’s raised brow. “I do. And I can’t always tell you because others need you more, but knowing you’re there, that you’ll never be too far? That’s always been enough.”

Shaking his head, Noah lifted him into his arms. “Not for my boy, it isn’t. But we’ll work on that. Do you want to try some s’mores tonight?”

“No, please thank you, sir.” Just cleaning the marshmallow off everything made the idea of being anywhere near the treats more effective than anything any horror movie had managed. “But I will try some disgusting burnt hot dogs if you really want me too. I’m sure I’ll hate them.”

That got him another laugh. “I’m sure you would too, but no. There’s some pork strips Lawson had Keiran write down directions for. He says you like those with some plain rice and we still have plenty of that we can cook.”

“That sounds perfect, sir.” Wren fussed with Noah’s curls, carefully pulling out the small twigs and leaves he’d managed to get in it. “May I sit on your lap while we eat?”

Noah looked surprised, but pleased at the request. “I’d enjoy that very much, Wren.”

Teeth chattering, cheeks pink, Reed sat on a towel in front of the fire, Lawson behind him, rubbing the wetness from his hair with another. He grinned up at Noah and Wren as they approached, relaxing against Lawson’s thigh. “They’re so cute. Don’t you think they’re cute, sir? And warm. They look warm.”

Clicking his tongue, Lawson gave Reed’s hair a playful tug. “You’d be warmer if you’d gotten out from under the falls when I told you to.”

“Yeah, I know. But you smacking my ass was worth it. And it felt so damn good.” Still shivering, Reed gave his Dom a grateful smile when Lawson grabbed a nearby blanket and wrapped it around his shoulders. “I want to do everything while I still can. Coming here… It’s perfect. I’d spend so much time here if I could.”

Lawson pressed his lips into Reed’s fluffed up, burnished curls. “You can. And as soon as you’ve recovered after the surgery, we’ll make another trip here and stay longer. This time, with Matt and Curtis. Curtis has been, but Matt hasn’t had a chance. I’d love for us to be the ones to show him how amazing it is.”

“He’d love to stand up on the highest point of the mountains with you and watch the sun come up, after making an amazing cup of coffee.” Reed closed his eyes, his tone a bit dreamy. “And I could kiss him under the waterfall and we could sneak off into the woods whenever you weren’t looking.”

Another tug at Reed’s hair brought his head all the way back, Lawson lifting a brow as he looked down at his sub. “I’d find you and beat you both.”

Letting out a happy sigh, Reed nodded as much as he could. “I know. It would be wonderful.”

The image that came to Wren’s mind brought a smile to his own lips. Jamie and Noah overpacking the car for the trip and Jared sighing with exasperation. A long drive with teasing and laughter and then...this. He rested against Noah’s chest, letting himself have a few minutes to hope that simple dream could become a reality.

For a good half of his life, he couldn’t remember having any dreams. Or wanting anything except for that next win because it was the only thing that he’d been able to offer for so long, it gave him a rush of accomplishing something.

A vicious cycle with no end, because the goals weren’t real.

The goals he had now were real. He wanted to share life with his family. Even if only in the small pieces he could take before he needed to return home, to the stability he’d managed to dig out there despite the chaos.

He didn’t want to lose his cage altogether, but…

Maybe have someone open the door now and then. So long as they stayed close.

“I wish it was snowing.” The words left Wren’s lips before he’d really thought about it. He shook his head. That was ridiculous. It would be too cold to stay out here if it was winter.

But Noah’s lips brushed close to his ear. “Tomorrow, I’ll show you snow. It won’t be too far out of the way and you’ll love it.”

Wren breathed in and snuggled up against his Dom’s chest, eager for tomorrow to come.

As always, comments welcome! At the end of each month when a serial like this is running, I'll choose one commenter to send merch from The Asylum to win a special prize pack including an Asylum Blanket!

Winner will be chosen at random and announced before the first segment of each month. All comments made before then will be entered.

If you want to discuss spoilers or what you think might happen next, make sure to join the spoiler group HERE. Let's see who's paying attention. Winners will also be chosen from the group! 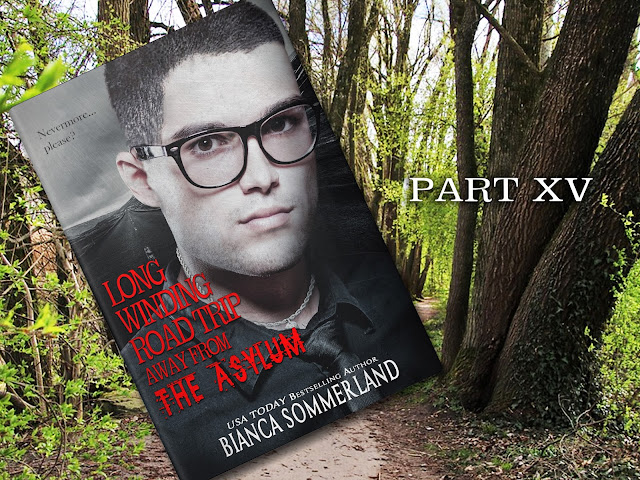 Long Winding Road Trip Away From The Asylum Part Fifteen 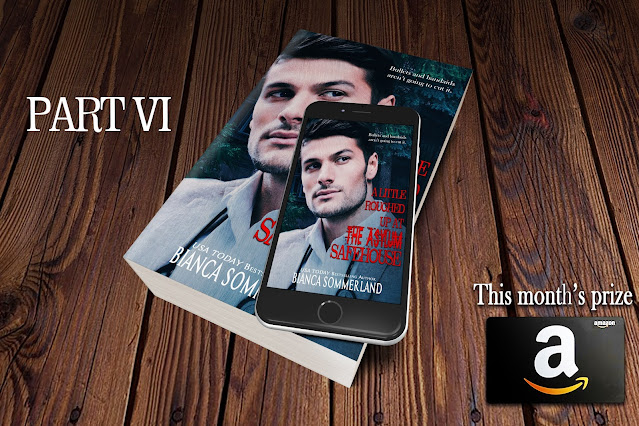 A Little Roughed Up at The Asylum Safe House - Part Six 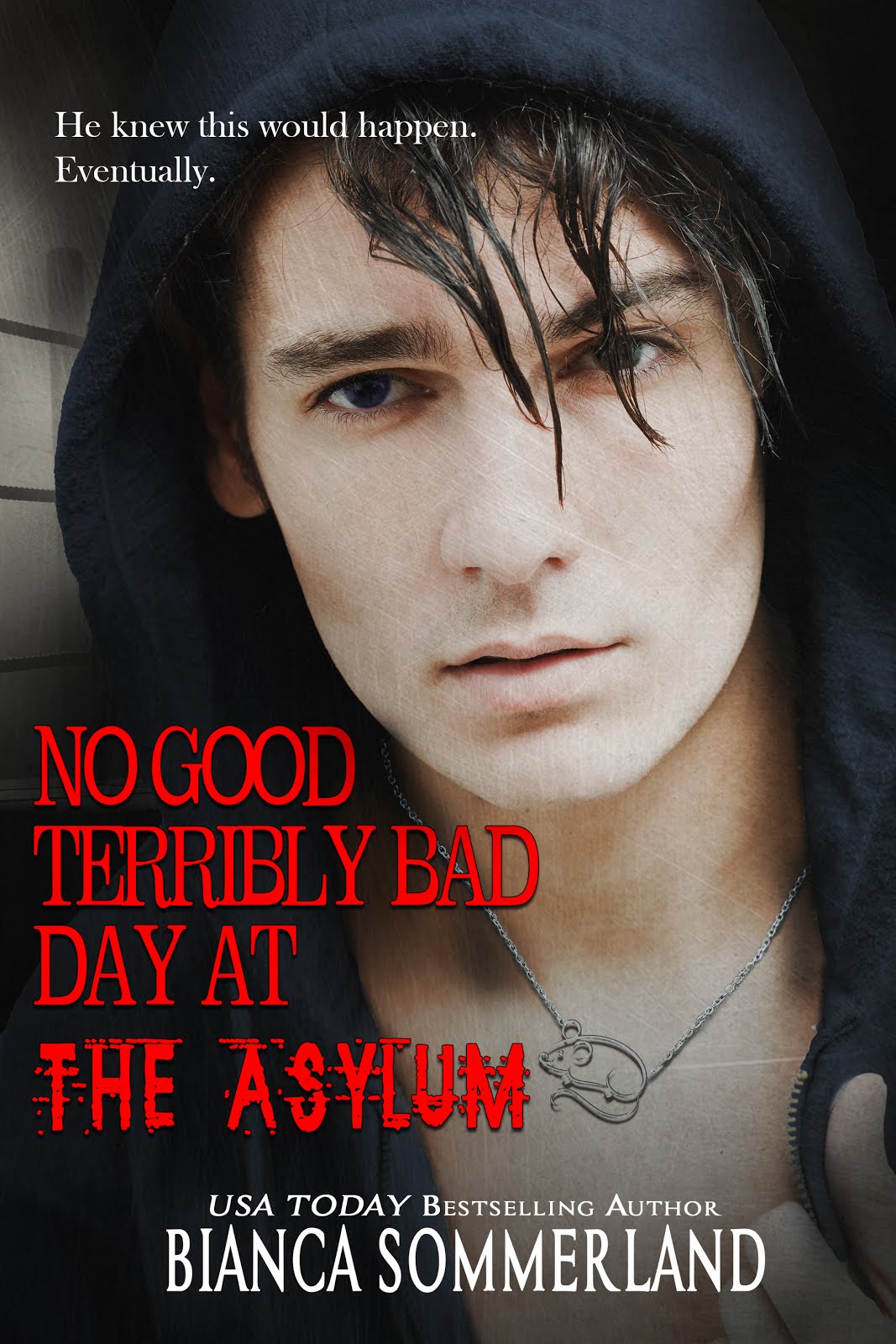 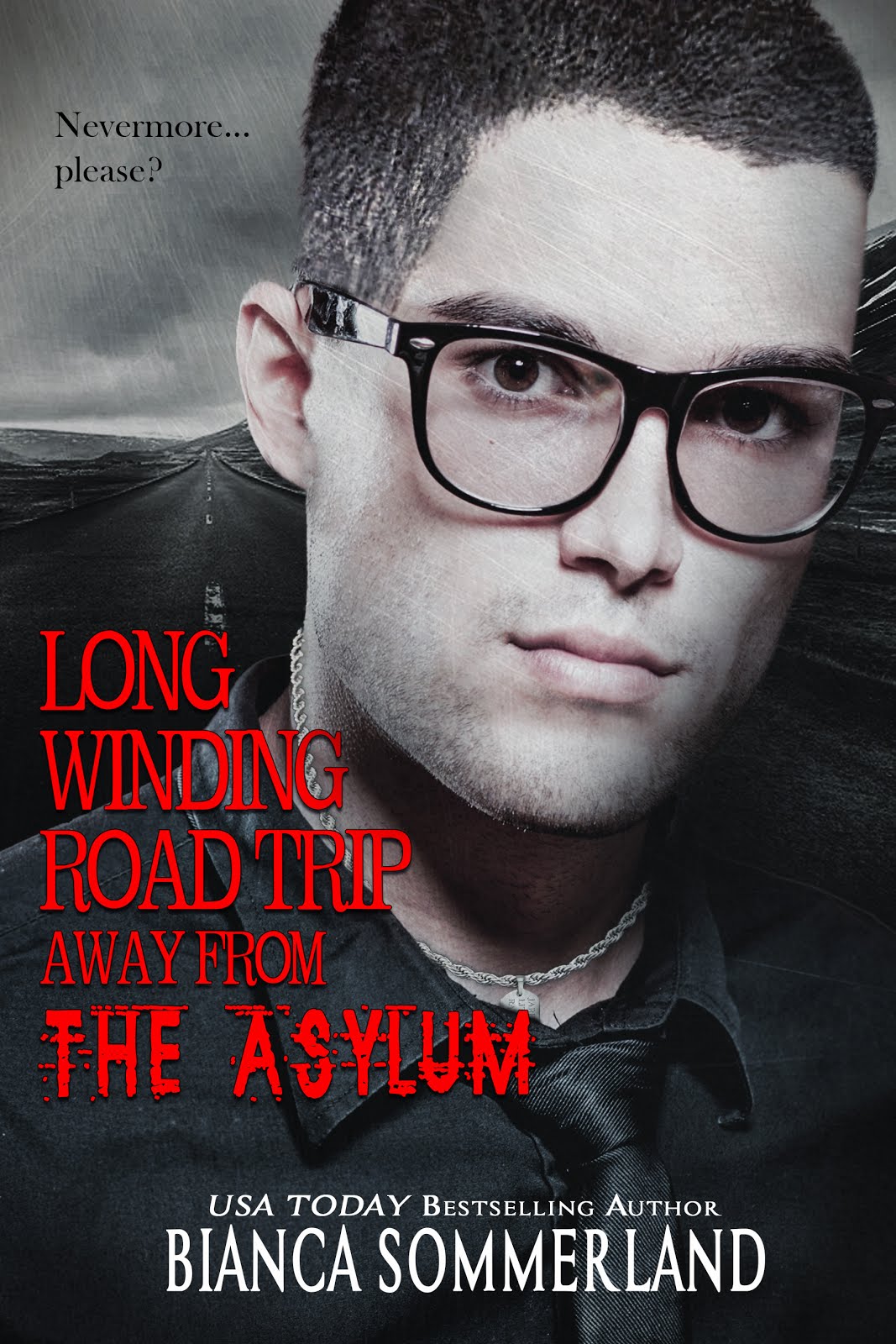 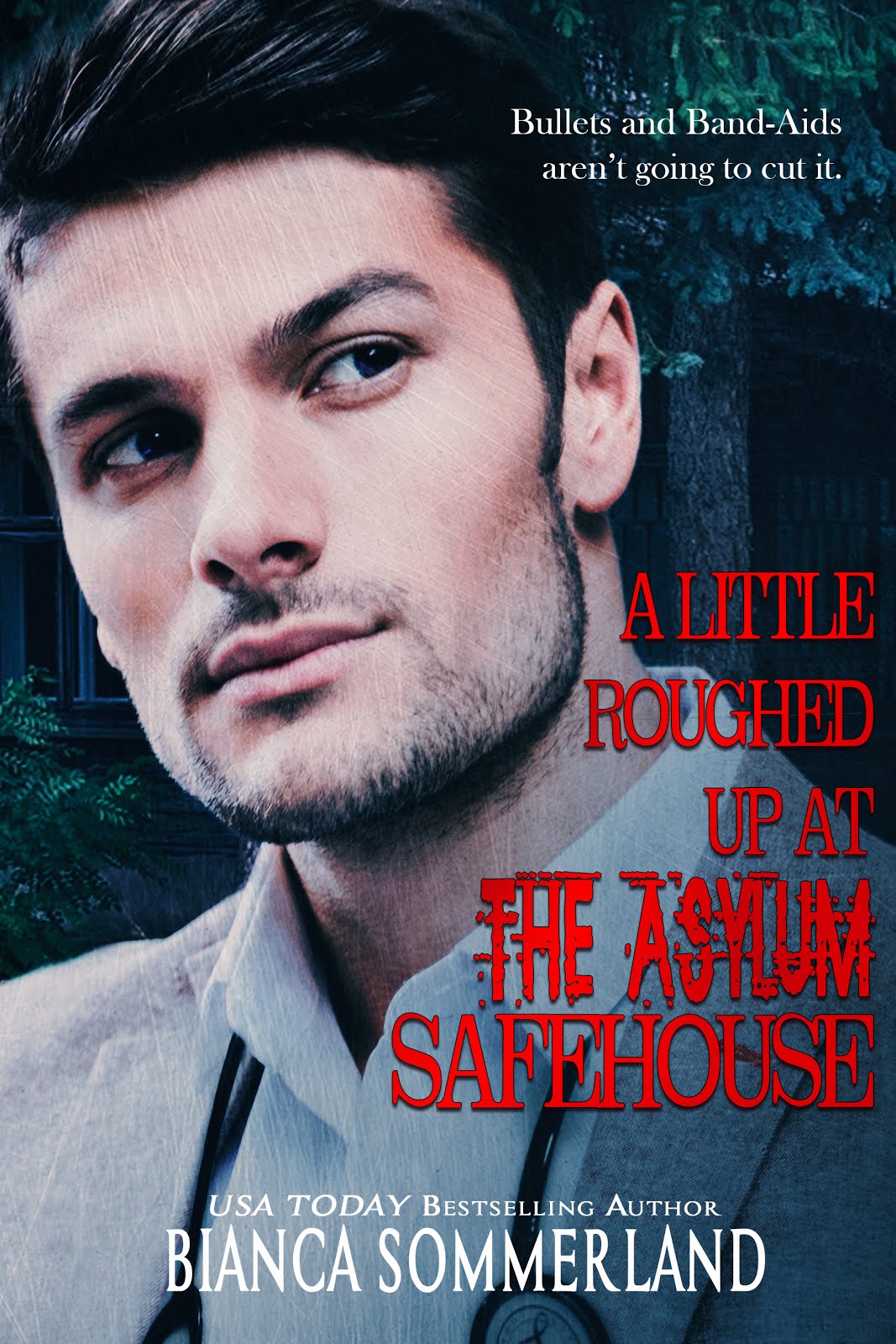